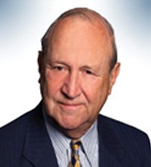 John S. Elder, Q.C., Chairman of the Board of Directors

Spent over fifty years with Fraser Milner Casgrain LLP, or Dentons Canada LLP as it now is, the largest law firm in the world. He had broad corporate, commercial and securities experience and handled a great number of mergers and acquisitions, financings and securities-related transactions. John served as Corporate Secretary of Onex Corporation for 25 years and as director and/or corporate secretary of several other public and private corporations, including the Global Television Network, the Discovery Channel (Canada) and Cogeco Communications. He is currently the principal of Anchor Corporate Governance which advises on corporate transactions, board and committee policies, and governance and public company secretarial activities. John is Corporate Secretary to, and a former director of, Central Fund of Canada Limited, a major bullion investment fund listed on the Toronto Stock Exchange and the NYSE MKT.

Robert Roy is one of Canada’s foremost documentary filmmakers, a founder of Toronto’s Stornoway Productions which the Globe and Mail called “the most creatively provocative television filmmaking enterprise in Canada”.  Rob’s films have covered an astounding range of subjects, been carried by all the major television networks, and earned numerous awards. William F. Buckley called his KGB Connections “the most powerful two-hour documentary on the subject of Soviet underground activity ever put together”. Rob has reported from Angola, the Horn of Africa, Afghanistan, Cuba, Iraq, Nicaragua, Lebanon and Cyprus, and covered Chinese organized crime, the Montreal biker wars, and the international drug wars. His hard-hitting five-part series on the neglect and misuse of Canada’s military, A Question of Honour, was nominated for two Gemini awards, and his Bridging the Gap: The Civilian-Military Divide was honoured by a screening at the US Congress and broadcast nationally on PBS.